Terry’s Book: What If We’ve Been Wrong?

Terry Beatley, author of the recently released book What If We’ve Been Wrong?

Terry Beatley is president of Hosea Initiative, author, wife, and mother. The Hosea Initiative is a non-profit organization which brings healing truth to a broken world devoured by secular lies. Through the power of story-telling, Hosea Initiative teaches a broader understanding of historical facts, exposes the abortion industry’s exploitation of women, and explains why worldview matters.

Terry has been a contributing writer for The Washington Times, World Net Daily, Fairfax Free Citizen, and The Free Lance Star. Terry has been interviewed for articles in the Washington Post, World Magazine, The Catholic Herald, and the Virginia Right, and has done various radio interviews. Terry is a 2015 worldview graduate of Chuck Colson’s Fellows Program, a 2012 graduate of the Jennifer Byler Institute, former Virginia coordinator for ParentalRights.org, a former investment broker of 14 years and a retired homeschool mother of two daughters. In 1986, she graduated from Virginia Tech with a B.S. in Business. She currently serves on the Virginia Christian Alliance Board of Directors. Terry has been married for 30 years to Kenny and they reside in Virginia. For more information, go to www.abortionking.com.

*Bernard Nathanson was a former abortionist and co-founder of NARAL (NARAL Pro-Choice America). He worked with Betty Friedan and others to legalize abortion in the U.S. After killing more than 60,000 babies, he had a profound conversion after seeing the development of the pre-born baby via ultrasound. Nathanson spent the rest of his life opposing abortion, most prominently through his production of two films that revealed abortion: The Silent Scream and Eclipse of Reason. How did America’s “Abortion King” succeed in selling the abortion lie?

After twenty years working in the insurance and investment business, Terry did what feminists had warned her would be most dissatisfying – she became a stay at home mom homeschooling her children for the next eight years. While studying American history, she became perplexed as to how America overcame slavery only to dehumanize another category of people – unborn babies. Terry’s quest for answers led her to research and then interview Dr. Bernard Nathanson, the doctor once known as the “Abortion King,” who admitted to being a mass murderer after cofounding what is known today as NARAL Pro-Choice America. He deeply regretted unleashing the culture of death onto America.

Dr. Nathanson gave Terry a  mission: to deliver his personal parting message and teach the strategy of how he used a deceptive propaganda campaign to deceive the American public which ultimately paved the way for the Roe v. Wade U.S. Supreme Court decision. He admitted to stripping the unborn child of all rights and protections. Terry promised him that she would make his name, story and mission common knowledge until Roe v. Wade is overturned and young women know the truth.  Hosea Initiative is one of the ways in which she is working toward this promise.

She is a graduate of the 2014-2015 Chuck Colson Fellows Worldview Program and is actively engaged in raising funds to make Hosea Initiative into a national organization.

In 2011, Terry ran a PAC devoted to defeating Planned Parenthood’s “Saving Grace in the Virginia General Assembly.” She has worked to awaken Virginians to the domestic and international threat to their parental rights and she has worked toward racial reconciliation by uplifting the principles of American liberty in minority communities. Currently, Terry serves on the Virginia Christian Alliance Board of Directors.

She is a 1986 Virginia Tech graduate; resides in Virginia with her husband of 30 years and two children. 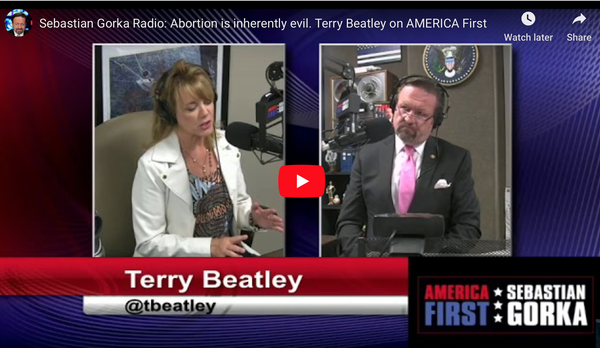 A New and Inspiring Voice Dr. Bernard Nathanson, the cofounder of NARAL, commissioned Terry Beatley to debunk the false narrative as ...
Read More
February 4, 2018 / Authors, Books, Pro-Life
Terry Beatley says, “Illegal entry into the United States does not earn a female the right to kill the baby in her womb.”

"One million people try to immigrate out of their mothers' wombs each year - and 500,000 are females - but ...
Read More
October 30, 2017 / Abortion, Culture, Guest Statements, Immigration, Immigration
An Open Letter To CNN – Stop Bashing Christianity

Come now, Erin, ”weep and howl for the miseries that are coming upon you. Your riches have rotted and your ...
Read More
July 19, 2017 / CNN, Culture, Erin Burnett, Op-Ed, Politics, President Trump
How did America’s “Abortion King” succeed in selling the abortion lie?

What If We've Been Wrong? Keeping my promise to America's "Abortion King" By Terry Beatley At the end of an ...
Read More
May 25, 2017 / Abortion, Op-Ed, Pro-Life, Terry Beatley
Feinstein Fails Women with ‘Precedent’ of Deceit