IN PURSUIT OF THE AMERICAN DREAM EVANGELIST ALVEDA C. KING

IN PURSUIT OF THE AMERICAN DREAM EVANGELIST ALVEDA C. KING

IN PURSUIT OF THE AMERICAN DREAM
EVANGELIST ALVEDA C. KING

“I still have a dream. It is a dream deeply rooted in the American dream. I have a dream that one day this nation will rise up, live out the true meaning of its creed: “We hold these truths to be self-evident, that all men are created equal.” Rev. Dr. Martin Luther King, Jr.

As a woman granted by the God the privilege of being born into the family that birthed the legendary prophet Rev. Dr. Martin Luther King, Jr.  I am honored to share a testimony of my pursuit of the American Dream. My memoirs are a legacy of forgiveness, agape love, and the eternal mercy of God.

I was born on January 22, 1951, and welcomed into the King Family Legacy by my parents Alfred Daniel Williams King and Naomi Ruth Barber King. My grandfather, Rev. Martin Luther King, Sr. had prophesied my birth, warning my mother not to abort me; but rather to birth me. “Naomi, there will be no abortion. This baby is a little girl, with bright skin, and bright red hair; and she will bless many people,” was Granddaddy’s promise to my mother Naomi.

Over the next several years, our family experienced triumphs and tragedies; the more public events being my Uncle M. L.’s rising to the pinnacle of leadership for the 20 th century Civil Rights Movement. His fame was lionized with his assassination in 1968. My father Rev. A. D. King, a leader and warrior in his own rights, was not granted the fame of his brother. Daddy did support Uncle M. L. in life, and in death. Daddy was killed in 1969 one week after walking me down the aisle for my wedding ceremony. Five years later, my “Big Mama,” Mrs. Alberta Christine Williams King, was gunned down while playing “The Lord’s Prayer” on the organ at the now historic Ebenezer Baptist Church in Atlanta.

During those years, I was a youth organizer during the Civil Rights Movement of the 1960’s. The world as we knew it was changing. Blacks won the right to vote; prayer was removed from public schools in 1963; and abortion became legal o my birthday on January 22, 1973.

During that tumultuous two decades, I experienced divorce, abortions, a miscarriage, fame, fortune, and so much more; and I remain thankful today for agape love, repentance, salvation, forgiveness and the mercy of God.

For me, civil rights, human rights, and human dignity have always been intertwined; all a part of my life in the King Family Legacy. There was a season in my life when I first became involved in politics; an experience that intersected my values and helped to shape my worldview. I had a front row seat for the making of the Martin Luther King, Jr. Holiday.

My grandfather and my husband were very involved in politics during those days. My grandfather, Rev. Dr. Martin Luther King, Sr. was a much sought-after voice for political endorsements in that season. He was credited with being a major contributor to the success in elections such as that of President John Kennedy, President Jimmy Carter, and many others. Along with Granddaddy’s success in the political arena, his approval was also coveted in the business world. Perhaps most importantly was his impact in the spiritual community. Granddaddy was the Senior Pastor of Ebenezer Baptist Church for many years. 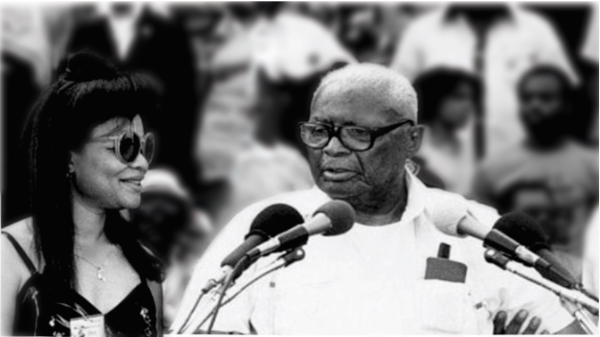 Having been elected to represent George’s 28th house in 1978, on April 4, 1984, I was a Georgia state legislator the day the MLK GA Holiday Bill was announced.

EXCERPT FROM THE ATLANTA JOURNAL AND CONSTITUTION

A bill creating a holiday to honor Dr. Martin Luther King Jr. in his home state of Georgia was signed by Gov. Joe Frank Harris today… the 16th anniversary of the murder of the civil rights leader.

State lawmakers, civil rights figures and members of the King family gathered at the State Capitol for the brief signing ceremony. They praised the compromise measure, which makes all Federal holidays state holidays as well, including the one honoring Dr. King.

Black legislators had fought since 1974 for a state holiday in honor of the only Georgian to win the Nobel Prize for Peace. But until this year, the measure had always stalled in the conservative Georgia House of Representatives. Congress Stimulated Movement Pressure for a King holiday mounted, however, when the United States Congress designated the third Monday in January as a holiday honoring Dr. King.

While the Atlanta Journal Constitution, and news media around the country covered the story; here’s my backstory:

State Representative Hosea Williams and I, as cosponsors of the bill, were joined by several staff of our colleagues to craft, introduce, and finally see the bill become law. As previously noted, the bill had been stalled in committee; and up until 1983, we had had little success or expectation of getting the bill to the floor.

During 1983 and 1984 I had been in and out of House Speaker Tom Murphy’s office asking for the bill to be released to the floor. During one session, I even invited my grandfather, my art Coretta Scott King, and the illustrious Dr. Benjamin E. Mays to come into Speaker Murphy’s office and explain the importance of this legislation. During that visit speak of Murphy was very courteous; yet noncommittal. 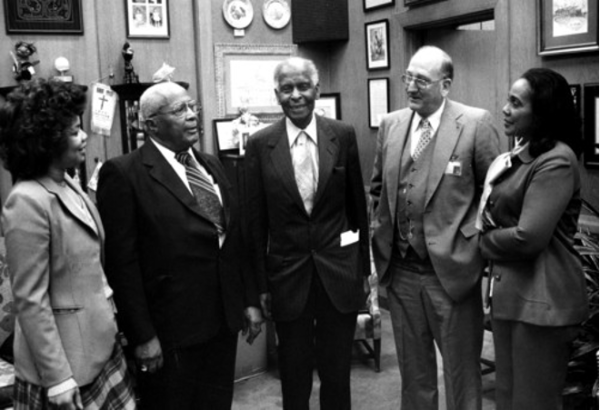 After my guests left the State Capitol, I went into Speaker Murphy’s office in tears. I began to bawl in all sincerity; as I was actually simply overwrought. I remember Speaker Murphy saying to me “Miss Alveda, if you will just stop crying, I promise to let the bill out of committee.” The bill was released from committee the next day.

I would not go so far as to say that my tears were solely responsible for these events; I do give glory to God for the  bill reaching the floor of the GA House of Representatives, the GA Senate, the GA Governor’s office, and becoming law. The bill was signed by Governor Joe Frank Harris. Governor Harris and my grandfather, had joined in a meeting of the minds previously. The passage of the bill was announced on April 4, 1984. It was also during this season that I became a born-again Christian.

Many years later, I was blessed to become a part of the mission of the 45th President of the United States; President Donald John Trump. During his four years of service to America, I became a “Trump Appointee.” I received the Presidential Lifetime Achievement Award. I was present when he signed many life affirming executive orders. I share these experiences in my book WHY TRUMP.

In January 2018, I was honored to join President Donald J Trump  on Air-force One when he signed the bill to expand the Rev. Martin Luther King’s birthplace in Atlanta into a national historical park — the first such park in Georgia. 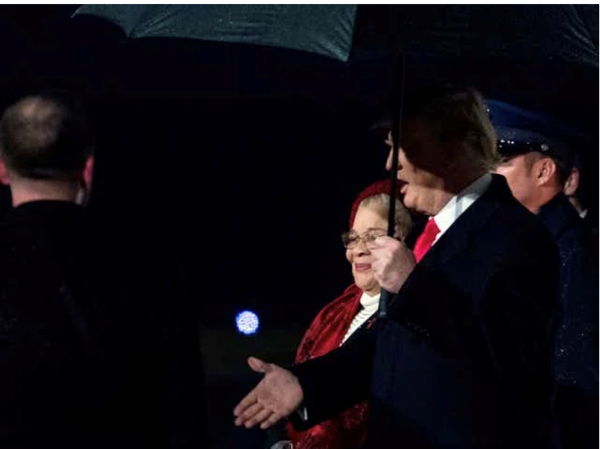 Trump signed Martin Luther King, Jr. National Historical Park Act of 2017 aboard Air Force One after touching down in Marietta, Ga., to attend the college football national championship game between the University of Alabama and the University of Georgia.Alveda King, niece of the slain civil rights leader, joined Trump for a small, private bill-signing ceremony aboard Air Force One. 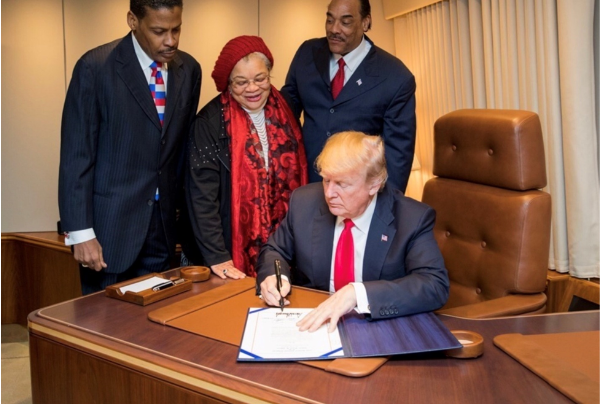 “Through his life and work, Dr. Martin Luther King Jr. made America more just and free,” White House deputy press secretary Hogan Gidley told reporters aboard the plane. “This important historical park tells his story, and this bill will help ensure that the park continues to tell Dr. King’s story for generations to come.”

Nearing the end of the “Trump Era [circa 2016-2020]”, The Trump Administration added the historical home of my parents Rev. A. D. King and Mrs. Naomi Ruth Barber King to the African American Civil Rights Network. It was also during this season that I published BLACK AMERICANS IN PUSUIT OF THE AMERICAN DREAM, and the book with Ginger Howard, WE’RE NOT COLORBLIND. 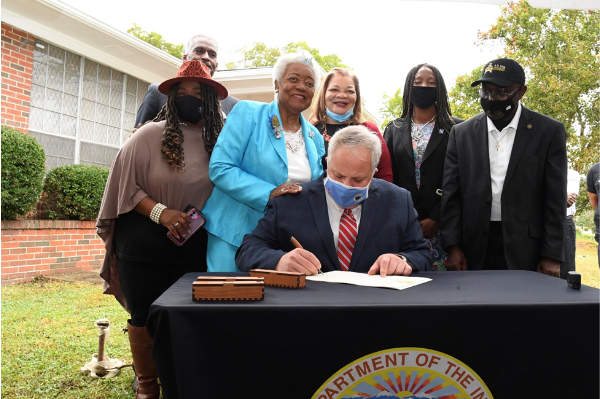 Trump Administration Designates A.D. King House to African American Civil Rights Network – Naomi King who is the wife of Alfred Daniel (A.D.) King, Dr. Alveda King, who is the daughter of A.D. King, Omie Crockett, who is the owner of A.D. King home, Jacqueline Washington Crockett, who is the daughter of Omie Crockett, and other distinguished guests at the Reverend A.D. King, Sr. house [restored after the bombing of the church parsonage in 1963] as he signed a proclamation designating the home to be included in the African American Civil Rights Network (AACRN). This designation further recognizes A.D. King’s numerous contributions to advance civil rights as the leader of the Birmingham Campaign.

In August of 2021, I retired from a sixteen-year full-time job with Priests for Life. Then, on September 1,  2021, I founded the prolife organization SPEAK FOR LIFE. Today, this is a season where challenges such as

COVID, Critical Race Theory, Abortion Debates and world chaos seem to abound, yet I remain convinced that the Gospel of Jesus Christ is the solution to every human dilemma.

For COVID, the Word is “Fear Not! God is our healer. Don’t fight each other, fight to live.” For the Critical Race Theory; there one critical race; the one blood human race of Acts 17:26. As MLK once said: “We must learn to live together as brothers [and sisters], and not perish together as fools.” The issue of the sanctity of life is simple: “Choose Life.” There must be better solutions to solving the problems of life, than killing innocent human beings. As Cathy Lee Gifford and I sing in our popular song: [HAVE] YOUR WAY YAHWEH.

Today, I too have a dream; a dream deeply rooted in the American Dream and the Gospel of Jesus Christ. This a dream for all humanity, one blood/one human race, from the womb to the tomb. This dream is not colorblind; we are multi-ethnic, praying to be united not by skin color, but by human kindness and agape love. 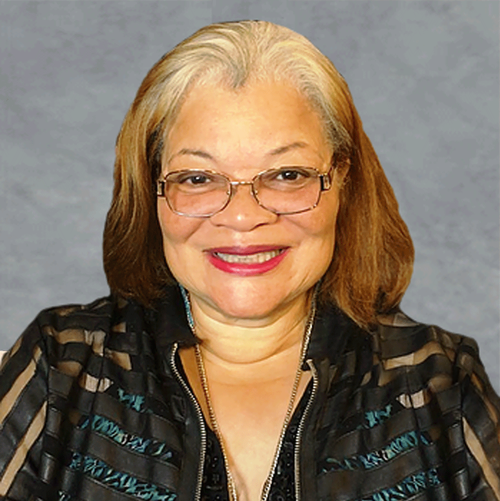 Dr. Alveda C. King is the daughter of the late slain civil rights activist Rev. A. D. King and the niece of Dr. Martin Luther King, Jr., and a Christian Evangelist.  She is founder of Speak for Life and currently serves as a Fox News Channel contributor and is the host of “Alveda King’s House” on Fox Nation. She is a former college professor, a former Georgia State Legislator and a film and music veteran. Alveda is also a twice-assigned Presidential appointee and a 2021 recipient of the Presidential Lifetime Achievement Award.

About the Author: Alveda King

Director of Civil Rights for The Unborn for Priests for Life and author of America Return to God. She is also a member of the National Black Prolife Coalition (NBPC) and is a Senior Fellow with the Howard Center for Family, Religion & Society. Alveda is a regular columnist for Newsmax.com “Insiders” section and a Fox News contributor.