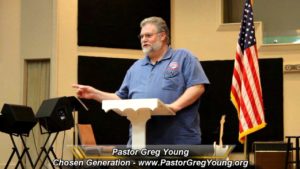 What sets Chosen Generation apart is the unapologetic focus on the principles that made this nation great. We were founded as a Christian nation and unless we turn back to God and ask for His intervention we will not win this battle. Pastor Greg Young is broadcasting  Chosen Generation to share and educate and bring about a change to a Godly nation once again.  Pastor Greg and The Chosen Generation’s guests help with the dissemination of truth from a biblical perspective.

Some have said that Christians have no business being in politics. That Christianity does not belong in political conversation. They propose a separation of Church and State, and even go so far as to opin that there is no precedent for such intrusion by the “church”. I disagree. The bible teaches that Jesus confronted the religious leaders of His day. These men were not just religious leaders but they were governing the affairs of the people of Israel. Jesus challenged their moral standard, temple worship and their political power.

John 11:46 But some of them went their ways to the Pharisees, and told them what things Jesus had done . 47 Then gathered the chief priests and the Pharisees a council, and said , What do we ? for this man doeth many miracles. 48 If we let him thus alone , all men will believe on him: and the Romans shall come and take away both our place and nation.

Lets look at John the Baptist who called out the King on his affair with his brothers wife. For this he was beheaded. Each of the disciples, except Judas Iscariot, was put to death because of Rome’s belief that these men posed a direct threat to their political power and allegiance to the Caesar.

“This is biblical evidence”

This is biblical evidence to support our involvement in the process in the New Testament. The old testament is filled with examples of God’s plan for His people to be involved in government and in raising up righteous leaders in order to enjoy His blessings. In fact the Abrahamic covenant begins specifically with the promise that God would raise up nations and kings from Abraham. (Genesis 17) In order for their to be a nation it must have leadership and that leadership is supposed to be filled by those who are of the Abrahamic covenant of which Christians are now a part through Jesus Christ. (Galatians 3:29)

Then there is the very heritage of America from the Mayflower Compact which clearly states the purpose of the pilgrims voyage to America, to the Black Robe Regiment, which preached the founding principles we find in our Declaration of Independence, Bill of Rights and Constitution, to the thousands of letters and personal documents which clearly identify that they intended that Christianity be the bedrock upon which this nation must stand, upon which it could only stand.

These firm examples bolstered my desire to start Chosen Generation Radio. I felt and still feel very strongly that the Hill Country and Texans as a whole need to be awakened to the fact that Texas is going the way of California. Battleground Texas has already invested nearly $10 million dollars in efforts to turn Texas blue. This all out war on Texas and the values held by our founding fathers must be opposed. What sets Chosen Generation apart is the unapologetic focus on the principles that made this nation great. We were founded as a Christian nation and unless we turn back to God and ask for His intervention we will not win this battle. As you peruse these pages and my blog I pray you will find information to help you engage in this battle. There are far too many examples to list here, but you will see them throughout my posts.

I realize that everyone can not be out everyday sounding the alarm and spreading the word. That is why I am doing the radio show; To share and educate and bring about a change to a Godly nation once again. I am bringing on great guests to help with the dissemination of truth from a biblical perspective.