[Note: Reading this report from courageous scientist and public educator Gregory Wrightstone will show you two examples of the opposition we at the Cornwall Alliance face, pretty much every day, often from powerful foes. Please pray for us and consider an extra gift right now to help us overcome these hurdles. Below you’ll see how to receive a free book as our thanks for your support!—E. Calvin Beisner]

Those who back the notion of man-made catastrophic warming don’t just support it as one would other technical or scientific ideas. Instead, they embrace the idea with the fervency of a religious zealot and brook no thought, science, or fact that may in any way call into question the premise of a planet spiraling into one climate apocalypse after another due to our “sins of emission.”

The facts of a concerted effort to silence contrarian climate reporting became crystal clear to me soon after the publication of my book Inconvenient Facts in late 2017. I found that any posts to alarmist Facebook pages, no matter how well-sourced and factual, were met with a torrent of vile, hateful ad-hominem attacks, not on the data, but on me personally.

An interesting and telling interaction occurred soon after the book was released when I offered to speak to the students of a professor who had been particularly critical of my take on our changing climate. He informed me that, not only was I not welcome because he would no sooner invite me to speak than he would a person endorsing a Flat Earth theory and (this is where it gets good) he said that he didn’t want his students exposed to “this kind of science.”

The hate reached a crescendo recently when I spoke at the Phyllis Schlafly Eagle Council meeting in St. Louis and a group of self-identified Antifa protestors showed up and attempted to shout me down, saying that I “had the blood of the refugees from Puerto Rico” on my hands. They further chanted “Scientists lie, people die!” and “Climate change is killing us!”

And, in an incredibly ironic twist, Facebook just today refused an ad to publicize my recent interview with Fox News host Brian Kilmeade in which I decried the degradation of the scientific process and the silencing of climate skeptics. 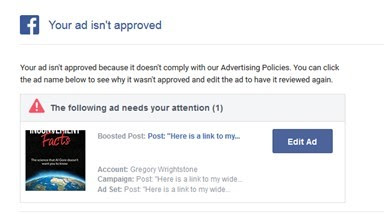 The science is NOT settled, but that is what the Ayatollahs of Alarmism want you to believe. With full control of the media, they are certainly advancing that agenda very well.

About the Author: Gregory Wrightstone

Gregory Wrightstone is a geologist with more than 35 years of experience researching and studying various aspects of the Earth's processes.