When will peace come to Israel?

When will peace come to Israel?

Deputy Minister in the Prime Minister’s Office Michael Oren (Kulanu), a former ambassador to the United States said: “US President Donald Trump’s administration’s decision Tuesday to close the Palestine Liberation Organization’s mission in Washington will help bring about peace between Israel and the Palestinian Authority.

Oren said Palestinian Authority President Mahmoud Abbas and his people have grown accustomed over the years to violating agreements freely without consequences. For example, he said, there is an article in the Oslo Accords that forbids them to act in order to recognize a Palestinian state outside negotiations with Israel.

“With the closing of the PLO office in Washington, the American administration is not changing the rules of the game, but

simply restoring them after years of neglect,” Oren said. “It should be noted that in contrast to previous administrations that would reward the Palestinians for abandoning the negotiations with Israel, President Trump is forcing the Palestinians to pay a price. As we have seen in the past – giving gifts to the Palestinians only keeps them away from the peace talks, and now the Americans are punishing them in order to make them return to the table.”

God says: “Because from the least of them even to the greatest of them, Everyone is given to covetousness And from the prophet even to the priest, Everyone deals falsely. They have also healed the hurt of My people

slightly, Saying, ‘Peace, peace!’ When there is no peace. Were they ashamed when they had committed abomination? No! They were not at all ashamed; Nor did they know how to blush. Therefore they shall fall among those who fall; At the time I punish them, They shall be cast down,’ says Yahweh.” Jeremiah 6:13

The Jerusalem Connection says: There will be no peace between Israel and her enemies, only containment and the realistic threat of the annihilation of those enemies. Peace will only come when the Prince of Peace is the Supreme ruler of heaven and earth.

Messianic Lite: Vayeilech, “And he went” 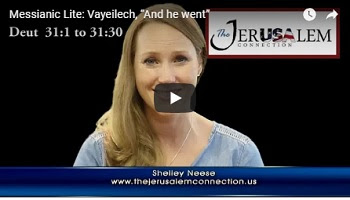 This week’s Torah portion covers Deuteronomy 31:1 to 31:30. Although Moses is trying to be an encouragement, he is also a prophet and it is impossible for a prophet to be blindly naïve. Moses knows that once the people are in the land and they no longer have to rely on God for their daily sustenance, or to see them through battle, many will grow apathetic and fall away from the Lord. They will do whatever is right in their own eyes. As the next generations, they were not eyewitnesses to the plagues in Egypt, the moment at Sinai, the fiery cloud over the wilderness camp, or the daily manna.

However, two major things have been put in place to aid each generation in their faith walk: the Torah and the holy calendar. In this 31st chapter of Deuteronomy, we learn that before Moses died, he finished writing down the words of the covenant so that it could be “an eternal witness.”

God instituted the holy calendar as a way of safeguarding national moments for the Israelites to regularly remember and reenact their story, and also as a source for accounting for their sins. We are now officially entering in to those high holidays. From the evening of September 9 to September 11, Jews celebrated Rosh Hashanah, the Jewish New Year. Rosh Hashana marks the anniversary of the creation of the world. Yom Kippur or the Day of Atonement falls on September 19th, next Tuesday.

About the Author: Shelley Neese

Author Shelley Neese: A member of the Jewish National Fund’s Speaker’s Bureau, Shelley is an experienced public speaker and is available to speak at your church, synagogue, or organization. She has a passion to educate Christians on the spiritual, historical, and moral reasons why they should actively support Israel.